Audrey Munson,  the motion picture star,  accompanied Allen Loughhead from Santa Barbara across Santa Clara Bay to Catalina Island,  where she is working on her next production,  The Girl O' Dreams.

This was Miss Munson's initial flight in a heavier-than-air machine,  and judging by the brevity of her costume,  she purposed to keep it as light as possible.

"It was the most wonderful adventure in my life, " declared the pleased Miss Munson when she landed. Several other California stars have bought their own aeroplanes,  and Miss Munson says she will own her own too....

Audrey Munson was an artists'-model-turned-actress whose images are scattered across the American landscape, even today.  And while her fame was a bright candle long ago - time has obscured the life story of this feisty, fragile, fierce, feminine woman who, for a brief while, captivated a world-wide audience.

She reached a zenith of fame that few ever achieve - and later, a dark basement of obscurity .  Her existence was as dramatic as any Hollywood script.... 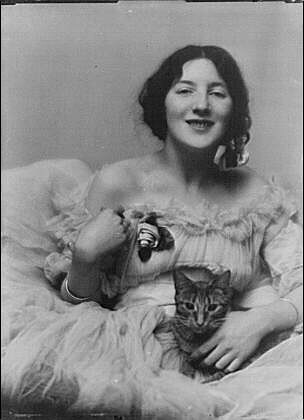 Born in Mexico, New York, in 1891, Audrey Munson was not only beautiful - but from an early age, she possessed a certain mythic demeanor, an ethereal countenance that entranced the entire world.

In 1906, she became an artists' model, a studio muse whose unclothed form inspired some of the most famous sculptors of the early 20th century.   Ms. Munson's face and figure portrayed enduring images of beauty, grace, justice, bravery, victory - she is immortalized in the New York City Fireman's Memorial, the arch on the Manhattan Bridge, as well as many of the scuptures created for thePanama-Pacific Exposition that was held in San Francisco, California, in 1915.  Some say it is she who is portrayed on the United States Mercury dime and the Liberty half-dollar. She appears, still, in monuments and statues in New York, California, Wisconsin, Maine, the Carolinas....

Thanks to her fame and beauty, Ms Munson was recruited as a movie actress.  She starred in several silent films of the era.  She also offered the world its first celluloid vision of a nude female form....

Inspiration, a moving picture of artist life released last November,  disclosed the heroine for brief moments in complete nudity.   Due to the artistry of the producer,  Mr George Foster Piatt,  late stage director of the New and the Little theaters,  and of Miss Audrey Munson,  a well-established professional model,  these scenes did not exceed the bonds of esthetic provocation.

~The American Journal of Urology and Sexology, 1916 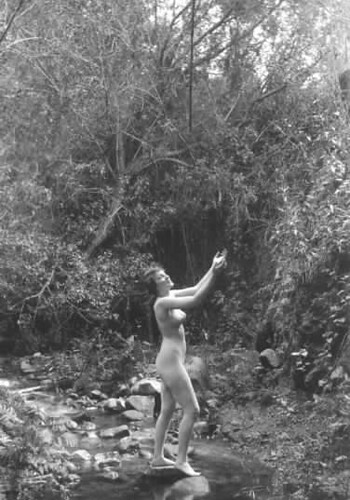 Ms. Munson was a favorite tabloid figure of her day - she was young, beautiful, uninhibited - provocative.  Society loved to follow her youthful escapades - her adventures, her romantic trysts, her decadent lifestyle.  Some vilified her for her indomitable spirit....others were enthralled.

In relatively few years, however, controversy and scandal had tarnished Audrey Munson's once-bright star.   Her fame had begun to wane.

By 1919, she and her mother were living in a boarding house in New York, owned by Dr. Walter Wilkins and his wife, Julia.  Dr Wilkins became obsessed with Audrey, and although she and her mother had already moved out of the house - the physician murdered his wife to clear the way for a romance with Ms. Munson.   Convicted of murder, Dr Wilkins hanged himself while awaiting execution on death row.

Audrey's outré lifestyle, coupled with the fickle nature of fame and the continual march of time,  had rendered Ms. Munson a has-been in both the artistic community and the film industry.

In 1922, Audrey Munson - already suffering from paranoia and mental illness that would plague her for the rest of her life - attempted suicide by swallowing mercury after being spurned by a lover.

This signaled the real beginning of her fall from grace - her dramatic plunge into darkness and anonymity.

According to the New York Times,

Ms. Munson was eventually taken to the St. Lawrence State Hospital for the Insane, in nearby Ogdensburg, where she lived from her 40th birthday, on June 8, 1931, until her death in 1996 at age 105.

But on that shining afternoon long ago, in the skies above Santa Barbara, California, like a winged goddess she flew over the sparkling Pacific Ocean, a young woman of unequalled beauty, glamor, and fame, with the entire world at her feet.

Unfortunately, like some other mythical creatures, it seems she eventually flew too close to the sun....

I found this short film about the life of Audrey Munson created by Roberto Serrini.  There are some wonderful images of the immortalized Audrey Munson.

Santa Barbara has always had close ties with the film industry.

To purchase tickets to the film festival, learn more about special events and award ceremonies at the Santa Barbara International Film Festival - visit their website: SBIFF

I knew "Miss. Adurey" when I worked at the State Hospital here in Ogdensburg back in the 80's

This is only a preview. Your comment has not yet been posted.

The letters and numbers you entered did not match the image. Please try again.

As a final step before posting your comment, enter the letters and numbers you see in the image below. This prevents automated programs from posting comments.

Having trouble reading this image? View an alternate.

Comments are moderated, and will not appear until the author has approved them.

(You can use HTML tags like <b> <i> and <ul> to style your text. URLs automatically linked.)

(Name is required. Email address will not be displayed with the comment.)