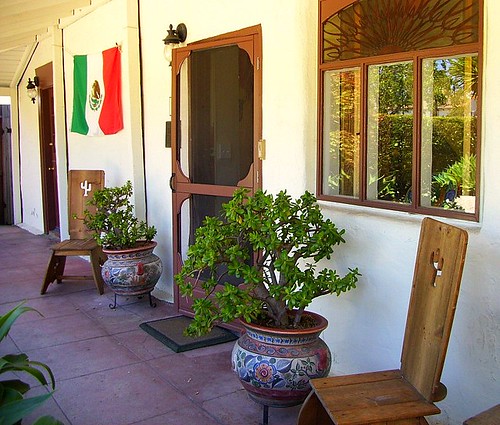 I've walked past the tall white adobe home a thousand times.    When I'm walking to Ralph's grocery store, or the pharmacy, or the Goodwill store on the corner of Bath and Carrillo streets, I've wondered at the history of the place.   I've admired the authenticity of the Early California style - the white, white adobe home and the surrounding wall with the rustic wooden gate that hung crookedly on its hinges; the crushed granite yard bisected by a brick walkway, ending in a deeply shaded, narrow portal, porch,  along the front of the home;  the tall, weathered, very old cactus planted in the yard.

In the past few years, I've noticed some changes:  the gate hangs properly now; the casa seems to have been freshly painted;  there is a bright Mexican flag displayed on the wall;  and sometimes, there is a sign out front that reads, "Casa Dolores - Center for the Study of the Popular Arts of Mexico."

While I have been intrigued, it seems the time has never been right to investigate further.  Until this past Saturday. 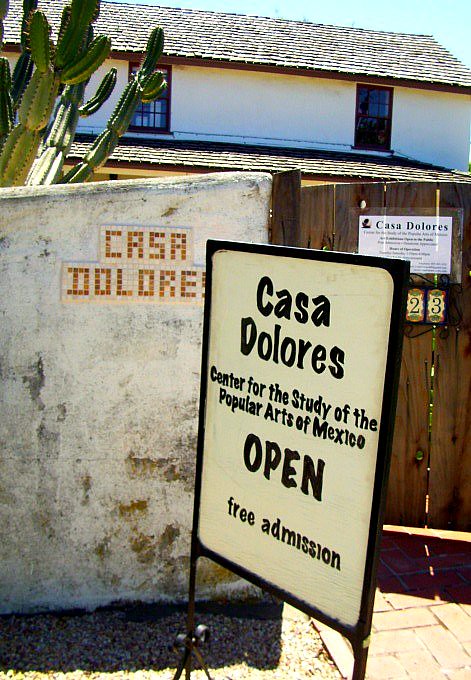 I entered the courtyard and approached the front door.   I was greeted  by Gabriel Ramirez-Ortiz,  who is the Exhibits and Events Coordinator.  He invited me in to the casa.   Transitioning from courtyard of bright,  sun-washed adobe to the cool interior,  I was captivated by the immaculate central room whose white walls are covered with vibrant masks in electric colors:  angels, devils,  wise men, animals, saintly ladies and comedic ghosts.  Some of the masks are carved, painted, some are covered with a pave of bright, tiny beads.  All are the stuff of dreams - or nightmares - or, as Gabriel told me - depictions of religious or moral themes. 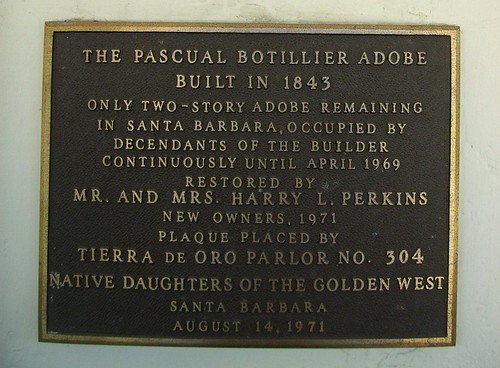 I learned that the house itself is a historic treasure:  built in 1843, it is the only remaining two-story adobe home in Santa Barbara.   From 1843 until 1969, this was the Botillier family home.   It was purchased a couple of  years ago by Linda Cathcart, an art historian with an incredible curriculum vitae, who recently retired and moved to Santa Barbara.

Ms. Cathcart saw the Botillier home when it was up for sale in 2008, and envisioned it as museum with rotating exhibits, an educational and research center, a repository for a wide variety of popular arts from Mexico.

Today, visitors are welcomed up the brick walkway, and are invited to be dazzled and inspired by the variety and quality of the artistic creations displayed within the thick adobe walls. 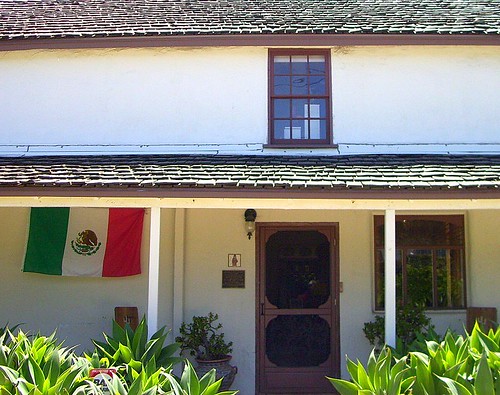 Ms. Cathcart has also created "La Tiendita", a little Mexican store full of representations of arts and crafts offered throughout Mexico.  There are statues, carvings, ceramics, and fabric arts.   You'll see tiny skeletons of papier mache - they are festive representations of the dearly departed who are remembered during Dia de los Muertos.   There are Mexican shirts, blouses, and skirts, all are colorful, and some are embroidered, and glittering with sequins.

There are  hand-painted pottery dishes, stringed puppets,  and traditional pinatas (burros and stars) in sweet confectionery colors.   There are more modern pinatas (skateboards) on display, and puppets (Pink Panther).  Gabriel explained that these various crafts that were once only available in Mexico have been embraced by the world at large - and reflect the various interests of different cultures. 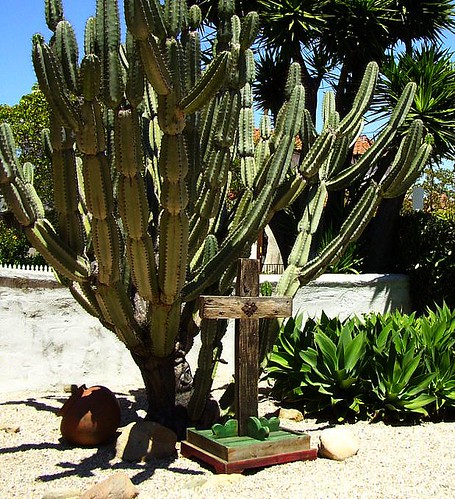 There are exhibits throughout the house, including the kitchen and on the second floor.  Visitors climb up the narrow wooden stairs, as the Botillier family did for over 100 years, to rooms that display more treasures on heavily carved tables that rest on dark old wooden floors.

You'll see a  collection of alebrijes, phantasmagorical  animals and imaginary creatures carved and painted in other-worldly colors and designs.   There is silver jewelry from Taxco, and pottery from Talaveras.   There are traditional costumes, glassware, and more.   The ambiance of the museum is warm and welcoming, and my guide, Gabriel - estaba muy amable.

Admission to the museum is free, and all visitors are offered an individual and guided tour of the home and collections. 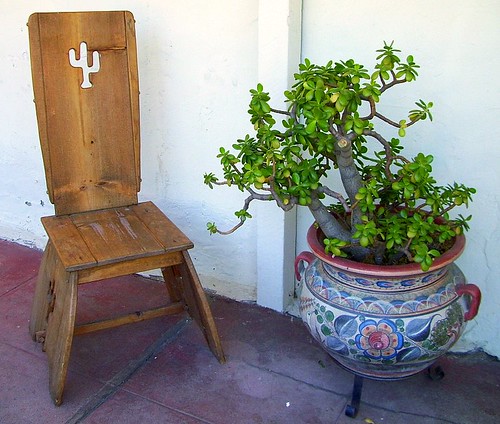 But the museum is not just a place for passive viewing of traditional arts.  The Center for the Study of the Popular Arts of Mexico offers visitors the opportunity to become engaged in the creative process.

Cooking classes explore the culinary traditions of Mexico and Spain.  Recently, participants learned to make Mole Negro, a traditional dish from the state of Oaxaca.    On June 25, aspiring chefs will learn to make four varieties of "Salsas de Mexico".  And in July,  just in time for Santa Barbara's annual Old Spanish Days celebration, Chef Monica will prepare a traditional Spanish paella - with ingredients like ajo, chicharos, azafran, camarones  - it will be an unforgettable, joyous evening of fellowship, food, and fun. 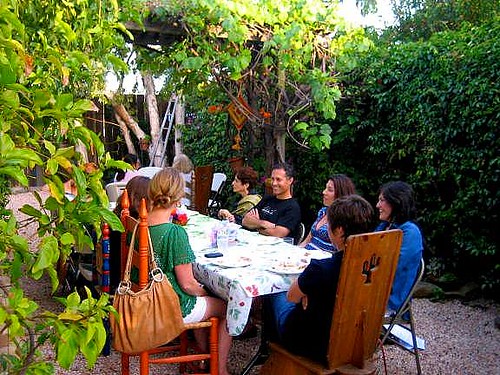 (I borrowed the photo from the Casa Dolores website.)

And this summer, special workshops are planned for children from ages 3 - 12.  Classes will explore a variety of traditional Mexican arts and crafts:  jewelry, paper flowers, painting, and traditional folklorico dancing.  Classes will be bilingual, to help children learn and practice Spanish.

Whether you live in Santa Barbara, or are just visiting - you are cordially invited to partake of the Casa Dolores experience. 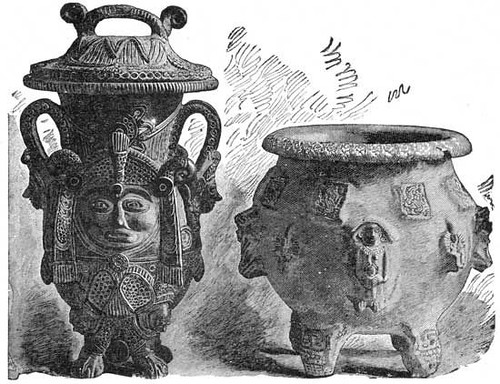 Check their website, and see if there is a class you might enjoy.  Classes are offered as fundraisers, to enhance and maintain the collection and museum, and to expand into the future to include research and study opportunities.  Or, become a member of this non-profit museum, or a benefactor - help to insure that this very special museum with over 6,000 items on display will remain a cultural and artistic resource for the community.  It is the only one of its kind between Los Angeles and San Francisco.

Casa Dolores is located at 1023 Bath Street in Santa Barbara.  The museum is open Tuesdays through Saturdays, from 1:00pm - 4:00pm.  Admission is free.

As the blue serrated mountains behind Santa Barbara come into sight,  however,  clean cut as the sure line of some Durer etching,  it levels out and we enter a very Eden of delight.   The air comes laden with the perfume of orange and lemon blossoms,  and of strawberries lying cool under their shiny leaves.   Avenues of pepper trees alternate with long alamedas of palmettos and gum trees.   The bougainvillea smothers the little cottages in its gorgeous purple bloom.   Villas overgrown with roses and pretty suburban homes now begin to adjoin each other.   An old mission church with twin towers gleams against the dark mountains and we enter the streets of Santa Barbara. 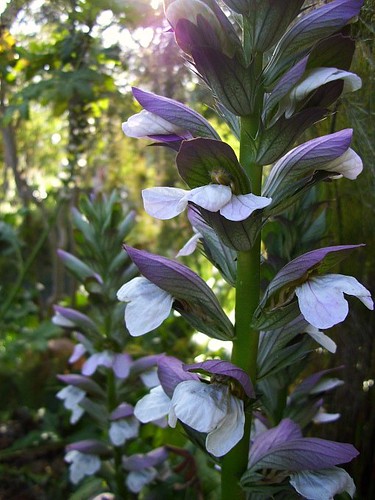 The fanciful classic poets sang that a charming nymph named Acantha,  beloved by Apollo,  was metamorphosed into the acanthus mollis.   The Greeks were accustomed to hang bunches of it over the doors of dying persons.   The Romans in their early wars used the leaves to shade their helmets.   This plant seems to have been a favourite with Virgil.   He represents the vest of Helen as embroidered with it,  Eneid  and the handles of the cups of Eurymedon entwined with it....

The acanthus mollis, is a dramatic and vigorous plant, also known as brankursine - bear's breech, or bear's claws.   Acanthus was originally found in Southern Europe, and subtropical areas in Africa and Asia.

It has become a prolific garden staple here in Southern California. 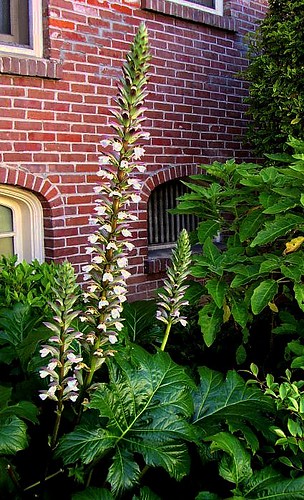 The prickly leaves of the plant are large, dramatic...of an emerald hue.  The leaves are deeply lobed,  and have conspicuous veining.   In mid-spring, the leaves of the acanthus emerge, tightly curled, from a central crown of growth.   They expand and unfurl in the late spring, and send spires of flowers skyward - six, eight, or ten feet tall -  in the early summer season in Southern California.

Their presence is so vivid in the garden and in the wild, and its influence so powerful, that acanthus has been depicted, since earliest times,  in  artistic flourishes and expressions found in design motifs throughout the world. 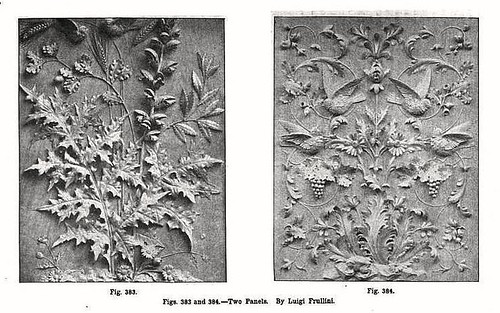 In almost every culture - from the earliest Greek, Celtic, Viking, Egyptian, Asian, African, and European - the acanthus motif can be found.  Whether Romanesque,  Gothic, Renaissance, Baroque, Rococo,  Beau Arts or Art Nouveau - the  the acanthus has been used to embellish paintings, carvings of wood and stone,  fabrics, carpets, iron works, wallpapers, and  intricate, illuminated manuscripts. 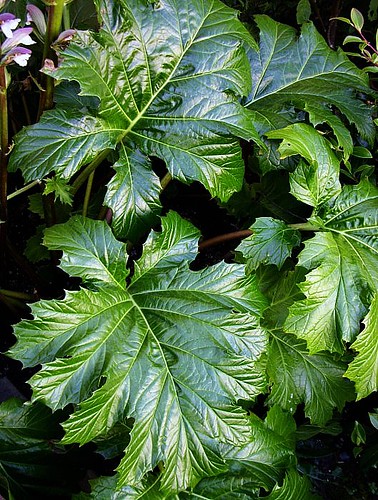 The acanthus is a pervasive theme within the artistic world,  permeating the collective consciousness and figuring prominently in architecture, fine art, and fabric design.  Everyone responds to the universal symbolism of the acanthus. 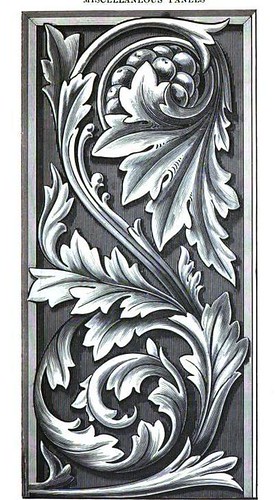 And while it is an elegant botanical motif, it is, first and foremost, a spectacular specimen of  plant.

It loves a semi-shaded environment, and it thrives when its feet are kept damp in rich soil.  It  responds vigorously to  a sub-tropical atmosphere.   If the proper conditions are met, the acanthus will reward the gardener with a living, architectural structure in the landscape, a poised and elegant beau ideal, whether featured singly, or massed in a large bed. 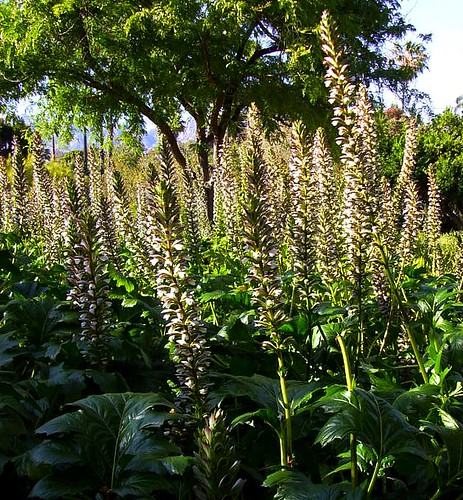 Santa Barbara has such a display at the north end of Alice Keck Park Memorial Garden.   Hundreds and hundreds of acanthus plants grow in a thick, dense planting, with hoards of leaves that grow waist-high, while the lavender-tinged spires of flowers rise tall above the path. 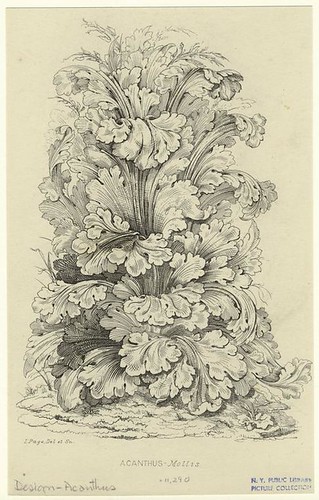 The acanthus beckon you to wander among them on a flagstone path, very near the little creek.  At a certain point along the path,  the past and future disappear...there is only a sea of acanthus,  leaves riffling in the breeze as the flower spikes undulate around you. 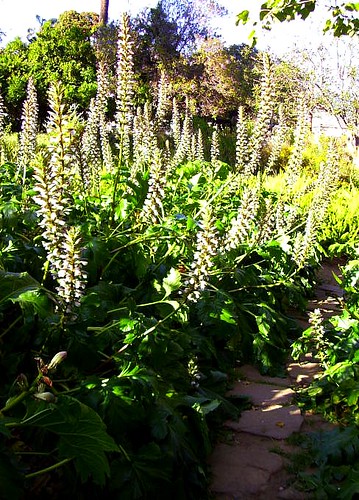 When I come here in the late afternoon, and stand among them as though they are creatures, not plants, I feel the ancient tug of recognition, of artistic expression....and I wonder what it is about them that speaks to us.... 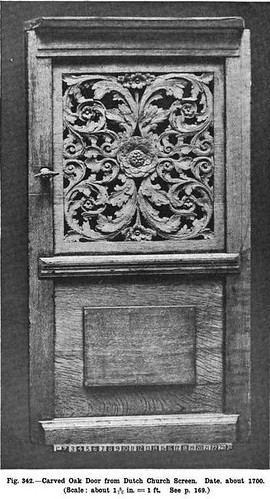 Maybe they are a  confirmation of "Yes" - a non-verbal, harmonious accord to a spiritual or artistic unfurling from within us, a lush display of possibility, of beauty, of marking what we love with a universal motif.  A column, a painting, a curtain, a chapel, a fountain...an inner longing to merge   with what is new, what is now, what is older than man. 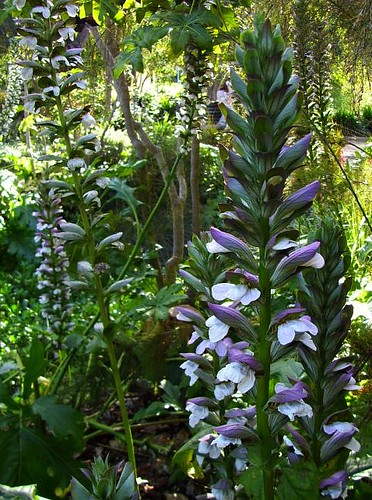 When you next come upon an acanthus, whether a living green plant with widespread roots, or an embellished page in a book, or a glimpse of a flourish carved in marble, try to identify just what it is....then please, let me know. 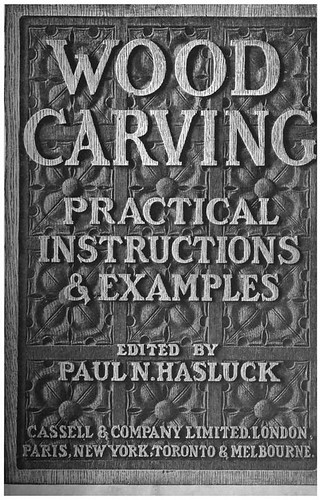 All black and white photos were taken from the book,  Wood Carving, by Paul Hasluck.  The link, above, will take you to Google Books, where you may view the book in its entirety.

Posted at 08:42 PM in Plants and Trees, What Blooms in Santa Barbara | Permalink | Comments (1)