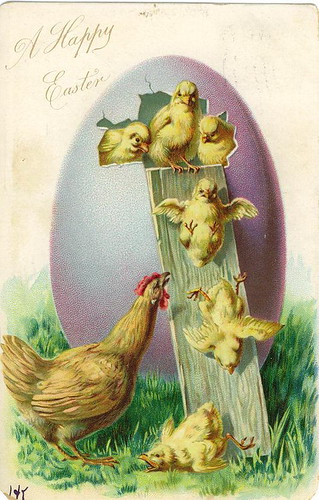 This sweet little Easter card, full of tiny little chicks, brought to mind a story I found recently, about a pelican who once lived in Santa Barbara, and became somewhat famous in California.... 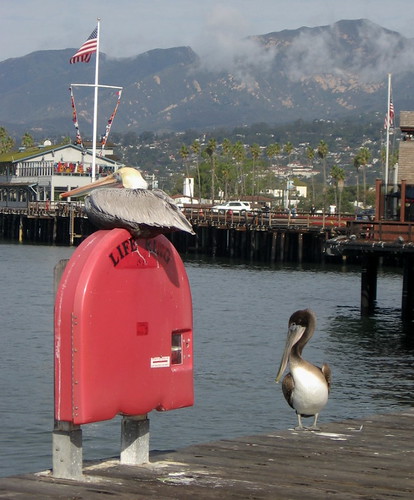 The story is about one of my favorite birds:  the California Brown Pelican.

The California brown pelicans have a robust population here, and can be seen all along the shore - on the wharf,  on the cliffs and beaches, and bobbing like corks on the water.   They fly in slow formation:  six, ten, twelve of them in a line as they glide above the glassy water of the Pacific Ocean.   Their wingspan is impressive - about 6' wide .  This allows them to travel at a dreamy pace.  They fly, single file, and lift  in succession then dip again as they encounter different currents.  They ride on an invisible ribbon of salty air.   They hunt for schools of anchovies or other small fish, and plunge headlong into the ocean  with a great splash.

In flight, they are regal, precise, even elegant.

On land - they are often quite cute - or comical. 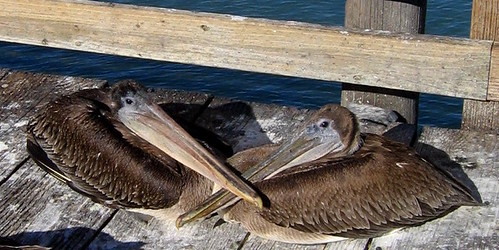 Not long ago, I was perusing the Library of Congress website.  I love the Chronicling America section which has a selection of old newspapers online.   I found an article in the San Francisco Call, an early bay area newspaper, in which readers were introduced to a Santa Barbara pelican of some renown. The article ran on August 7, 1909.

The pelican's  name was Jim.   It seems that Jim like to toss little round things - like soft yellow Easter chicks, and catch them in his beak before tossing them high in the air again.   According to the article, "this was disastrous for his master's attempt at chicken-raising."  (Not to mention even more disastrous for the little yellow chicks.) 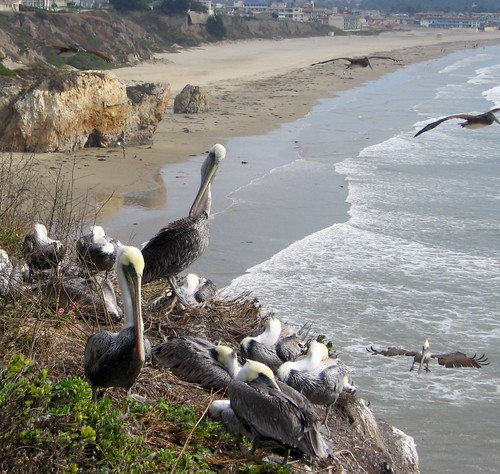 To remedy the situation, the owner got a little terrier pup to be a companion for Jim.  The pelican.   Although an unlikely pair, the two became fast friends.   They did everything together.  Their owner would put them on a table in the yard to bathe them together...and all through their shower/bath they nipped and pushed each other, "like a couple of mischievous boys."

At play time, the energetic puppy would run in circles around the pelican - "six times while the pelican waddled sedately around one."  And when the playful puppy was too playful, the pelican would scoop him up in his bill until he calmed down.   They loved to play ball together.  The pelican would toss the ball high in the air, and catch it in his beak.  He seldom, if ever, missed.  He would pitch the ball to the puppy who would leap off the ground to catch it.

I am not making this up.  There are pictures.   (Click the link to the LOC website - scroll down on the page, and see the article at the bottom center.)

The article goes on to say that before the advent of  "electric cars" in Santa Barbara, Jim was found once to be wandering in the middle of State Street, along the tracks, bringing the mule-car system to a complete halt.   "The driver clanged his bell vigorously, but Jim never budged."  Apparently, he was not deterred by the sound of the bell, and even decided it was a perfect time to stop altogether and preen his feathers.  The horses  were baffled and "sat down to think it over...and concluded that perhaps they could ward off the vision if they stood upon their hindlegs and stirred the atmosphere  with their forelegs." 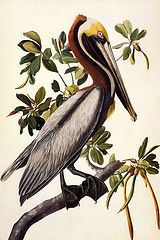 Jim still did not move, and seemed even to enjoy the attention.  While the crowd of passengers laughed at his antics, the streetcar driver had to abandon his post and look for the owner, hoping he could remove the offending bird.   Finally, the owner "was able to induce the big bird to waddle peacefully home".

It was also reported that Jim escaped his yard whenever the gate was left open, and tried for a repeat performance at every opportunity.   Apparently, people who used the street car planned their trips around his anticipated interference, and "took him into consideration in making their engagements."

Yes, Jim the pelican held court over State Street.  But times change, and the street car system was upgraded to electric cars, eliminating the drama of horse vs pelican.  In fact, poor Jim had to learn the hard way, suffering a broken leg, wing, jaw, and other injuries before he conceded that his reign was over.  "Now a sadder and wiser bird",  Jim abandoned his frequent promenade down the tracks.

And that's all I know about Jim.

(One of the most beautiful pictures I have ever seen of the California Brown Pelican  is one I found on Flickr.  Click the link - you'll be amazed - thanks, David!)