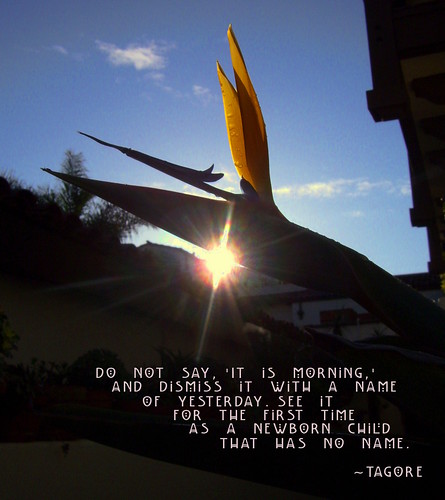 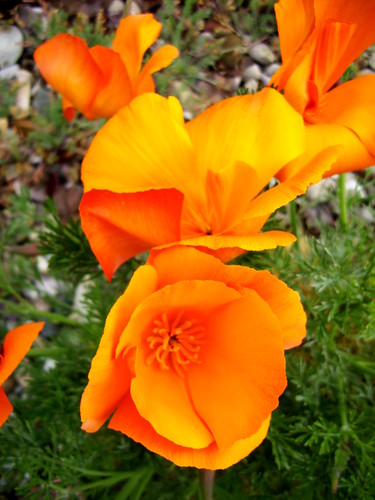 While the season of the garden Poppies is limited, the California Poppy blooms several months, beginning in February.   In the garden,  it grows more rugged and gives a richer,  larger bloom than it does on the mountain slopes.   Its home is the sandy foot hills under the unprotected sun.   The foliage is fine,  and a blue green.

It is not noticeable in a patch growing wild,  as the whole field is a blaze of golden cups.   In the garden,  the foliage becomes more pretentious.   The California Poppy is a single,  four petaled flower with a color and sheen indescribable.

I realize my posts revolve around florals these days.  I didn't plan it that way.  In fact,  I have tried to resist my urge to photograph flowers, and read about them, write about them, and scan the sides of the streets and the highway for them - to the exclusion of almost everything else.   But I am powerless.    I am besotted with flowers.

Although the calendar reads "February", the breeze tells me it is spring.  It was 75 degrees last week.  The air is warm and crystalline.   And while we have a cool evening, or a rain shower here or there - it's too late - I have put winter aside and am embracing the season of springtime.

From February through May, I will have my springtime.   And you'll be seeing more flowers.

...Love by the spring is grown;

As, in the firmament,

Stars by the sun are not enlarged, but shown,

Gentle love deeds, as blossoms on a bough,

do bud out now.