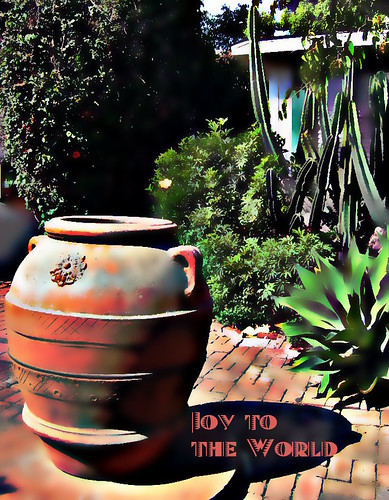 There is a hidden world on East De la Guerra Street, just a little more than a block from  State Street.   Meridian Studios are  partially obscured by a low wall topped with a black wrought iron  fence, a shadowy courtyard dense with plants, and an atmosphere that is mysterious...compelling.

The studio building was designed by George Washington Smith in 1923.  It was conceived  as a companion  to the original Lugo Adobe that is situated at the back of the property.

Built in 1830, the Lugo Adobe is one of Santa Barbara's oldest buildings.   It is considered part of the Pueblo Viejo, or the  Old Town section of the city.  It was originally the home of a Spanish soldado, or soldier, who served at the Presidio fort nearby.   It stayed in the Lugo family for many years.  In 1922, it was purchased by Bernard Hoffman and was used as office space by the Santa Barbara Plans and Planting Committee, whose members were dreamers as much as planners.

Together, the Committee members envisioned blending the extant historic adobe structures in town with restyled Victorian buildings that could and would become the new  Santa Barbara:  a  Spanish Revival-style city, at once tropical and Mediterranean, whose air would be  perfumed with vines, flowers, and sea breezes,  the streets and homes shaded by palms and eucalyptus.  The city itself  would be vibrant, colorful, romantic, playful.

Hoffman commissioned George Washington Smith to build artist's studios on the property in front of the Lugo Adobe.  Smith completed the Meridian Building in 1923.   The three-story building is placed diagonally on the property, and features north-facing windows that offered perfect light for the artists. The beautiful venue provided limitless  inspiration. 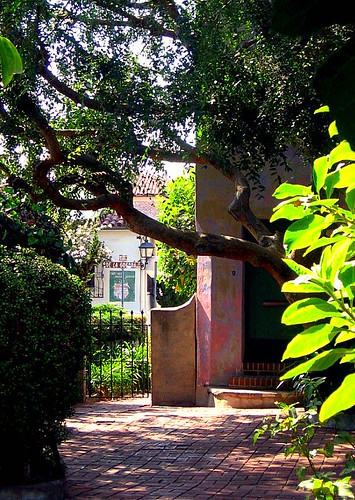 George Washington Smith was able to translate the dreams of the community into the Meridian Studios, whose lines and siting captured the spirit of the place, the neighborhood, the terrain, the unique light that is cast as a result of  our south-facing orientation on the coast.  The studios are mostly offices now, and they retain a simple and elegant beauty.  They have remained integral to the downtown area since their completion in 1923.

There are giant terra cotta urns, and tiny beds of moss in hidden corners.   There are blue doors and red geraniums.  There are sharp jutting rooflines, and enormous curvilinear leaves on the monstera deliciosa.

The two-story building on the west side of the courtyard was built in 1925 by Carlton Winslow, who also helped to design the incredible Los Angeles Public Library in downtown LA.  His architectural contribution to this site is a seamless fit.   It appears that all the buildings on the property came into being at once, not in different phases  that span almost 100 years.

Smith and Winslow collaborated with the town's earliest architects - the Spanish - who imbued the  Lugo Adobe with an inherent beauty.   Together, they  succeeded in creating a timeless little mise en scène that is at once angular and sinuous, dreamy and distinct, classical and modern.