Until recently, in the great scheme of things, most of Southern California was an arid landscape of chaparral, oak trees, and grasses.  When the Spanish first arrived and began building homes and towns, they planted a few things in this new landscape, mostly small stands of  fruit trees, olive trees,and grape vines.  For shade trees, they favored a the schinus molle, a Peruvian native that we have now claimed for our own.  We call it the California Pepper Tree. 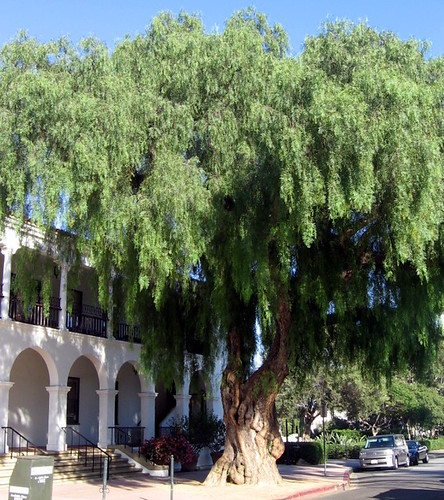 The name is somewhat misleading as it is not originally from California, and it has no relation to any sort of  "pepper" .  It is a member of the anacardiacea family, which includes the cashew tree, and the sumac, as well.

In the early days, the trees were favored for their rough, dramatic trunks, and the light, feathery foliage that will, if the tree is left untrimmed,  droop clear to the ground.

The red-pepper-tree, with its gracefully drooping branches, resembles a weeping willow, but its growth is more luxuriant, its dimensions larger, and it is adorned with bunches of beautiful small red berries.  -page 9

At the turn of the last century, it was, along with the eucalyptus, the most widely planted tree in Southern California.   It was also extolled for its virtue in creating windbreaks when densely planted.  It was even touted for its excellence as a "dust-catcher", as dust was an ever-present and very real problem in the Old West.

However, with the coming of the citrus ranches, it was discovered that a fungus harbored by the California Pepper was injurious to the oranges and lemons in this new and lucrative industry.  Soon, California Pepper trees were cut down by the hundreds.

However, there are some fine old specimens still to be found.  They will always be found near the California missions; it is said that every pepper tree in California came from the parent tree planted at the Mission San Luis Rey.  The 1940 edition of Trees of Santa Barbara notes that the pepper tree at the Santa Barbara Mission was planted in 1825, a progeny from that parent tree near San Diego. 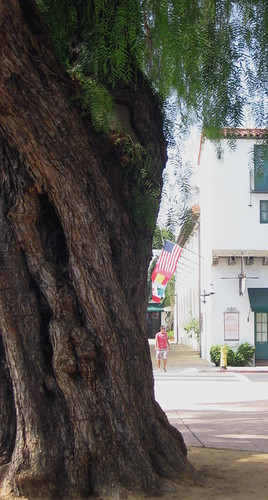 Throughout Santa Barbara, you'll find quite a few fine pepper trees around town and along highways and back roads.  According to the 1941 Works Project Administration book entitled Santa Barbara,  the pepper tree in front of our City Hall is "ancient".  De la Guerra Plaza, location of our City Hall, was established in 1855, and has been in continuous use since then.  I don't know when the tree was planted.  But as you can see from the picture above, it is a wonderful specimen.  These trees have become icons of a younger, more romantic time in California.

Jesse Pryse Arthur published an ode to the tree in a volume of Sunset, the Pacific Monthly, printed in 1913:

The pleasantest place for a child to be,

Is under my tent, the old pepper tree.

Its fern-like branches droop clear to the ground,

Its red and green berries peep in all around,

The shiny brown grasses have woven a mat -

I love to breathe the spicy scent

Which fills the air of my pepper tree tent.